Maybe It's Not Corruption, If Everybody Says It's Okay

I don't have much to say today, other than I wish I were in Haiti this weekend for Carnival. Instead, I wanted to share this article, written by Richard Morse who leads RAM, one of the best known bands in Haiti. He also runs Hotel Oloffson where RAM plays every week.

"a band will be given a certain amount of money "officially" and then they give some of that money back, I've heard up to fifty percent, to the Ministry where they got the money from, and then, that kickback money will be given to the President's choice candidates."

Amazing - they even figure out a way to mix the artists up in the standard hand-washing that goes on.

And I'll end with a video of RAM playing Carnival last year:

Posted by Sander-Martijn at 7:18 PM No comments:

One step forward, two steps back?

Some days I feel like I'm getting closer to my departure for Haiti because every day I do at least some things towards my goals. Other days I couldn't feel further away. Today is unfortunately one of those days. I have yet to find a job in Haiti and none of the people that have expressed interest in buying The Bridge Studio have come through with a firm offer yet. We're coming towards the end of the month and soon I'm going to have to make the difficult decision between staying another month in an expensive place during a hard economy so that I can keep trying to sell the business or giving up on said sale and saving on the expenses.

But, I try to stay positive and look at the bright side of things. I received some needed information on visas today and I updated my website with a new layout and a lot more images, including a section specifically of photos of Haiti and a prominent link to this blog. I still have bits and pieces of work trickling in while I look for a job in Haiti, which is more than a lot of people can say these days, and I have a great support network of people that are trying to help me how they can.

I think now I will go update my resume, as per recommendations by Mareile while I try to contemplate whether my glass is half empty or half full.
Posted by Sander-Martijn at 9:07 PM No comments:

Sorry my blog was down off and on today, I had a spot of trouble migrating it to it's new and more appropriate name, haiti.sander-martijn.com

Also I will be slowly migrating the template to look more like my website. Made first changes today, will do some more changes a little later.
Posted by Sander-Martijn at 3:05 PM No comments:

We were walking along the north side of Champs de Mars, the big park in the center of Port-au-Prince in Haiti, around the presidential palace. It's also where everything happens, where the life is. Bikers, Roller Bladers, concerts, salesmen, beggars and thieves all congregate in Champs de Mars. We came across a cart, the kind that pulls behind a vehicle, is usually brushed chrome and has a generator attached to run various things inside. In New York the most common appearance of such vehicles is in the morning when you're half awake, wandering between the subway and your office and you see such a cart and stop for coffee. If you're adventurous you might just add a bagel with cream cheese to it.

There were a bunch of guys inside, each running two blenders. A lot of people waiting, so it was clearly a popular spot. Into the blenders they first threw crushed ice, then mango pulp, then a ladle full of chopped vegetables - potatoes, sweet potatoes, not sure what else, then salt, and milk. They blended it up for a while, then took a ladle full of it and shook a bit onto their forearm and licked it off. Then add more of one or more of the ingredients and repeat. This would go on for quite some time before they appeared satisfied with the result.

When this happened they would pour it into a styrofoam cup. The man who took it would pick it up and gulp it down as fast as he possibly could and then put it back down, at which point the man in the cart would refill it. Thus, they essentially got two for one.

It was finally my turn so I took and carefully tasted it, not sure what to expect. I already knew it was thick and basically looked like a milkshake, but with the vegetables and salt in it I wasn't so sure. It was actually sweet, but not too sweet, with a twist to it that could only be tasted, not described. I don't generally like particularly milky things, but this was quite good. So I tried my hand at guzzling the shake, but couldn't quite handle it. Partly just not used to drinking that fast, especially something so thick, and partly I began to get brain freeze. I made it through about 2/3 before he started to get impatient. I held out my cup and he filled it to the top again, and we headed into the park to enjoy it with a Barikad Crew concert - a story for another day.
Posted by Sander-Martijn at 8:26 AM No comments: I received the following email from a stranger - sent through my website so this person had seen my work and perhaps read some of my opinions - below is my response. This may not be directly and exactly about Haiti, but as it exposes some of how I think about my work, I believe it relates.

I have a question about the way others see us.
Nothing to do with the way we think of ourselves, just as an image. The way I see myself in the mirror is different to what I see in the pictures. This confuses me and makes me unsure of how I look on the outside as an image.
Which one is the real me?
Mirror or the picture?
Thank you

There is no such thing as the real you - not in mirrors, or photos or anywhere else. Each person you encounter will interpret you differently. Your mother sees you differently than your lover, than your friend, than your enemy, or your child - the way they see you visually is more than what you actually look like because inexplicably mixed into this is their personal attachment to you and your history with them. A stranger sees you differently still, for they have no history.

When you look in the mirror you see your interpretation of yourself - a mix of how you want to be seen (idealism) and the things you see wrong about yourself (criticism) among other things. A photo, on the other hand is a moment in time - it is how you wanted to be seen at that moment, interpreted by the photographer and captured in time forever. This of course requires much trust in the photographer and their eye. In the hand of an amateur the results can be devastating, while in the hand of a master the result can be powerful, moving and beautiful. It is still not you. The id, the identity of a person is far more powerful than could possibly be captured in any way. In my work my goal is always not to simply capture what the person looks like but to bring out something about what's inside of them. This is not truly possible, but I think I do succeed to some extent.

Images have become incredibly important in our society, and the photographic image has been important almost immediately since it's invention. It is futile to fight it, therefore it will be easier if you embrace it. However, do not become a slave to your or anyone else's image. If you live your life as a good and beautiful person that will shine out to all others you encounter and will be far more powerful than whatever your actual appearance is. This is what I really speak of when I state that I photograph the beauty of people.

I hope this helps you along on your journey
Sander
Posted by Sander-Martijn at 9:37 AM No comments: 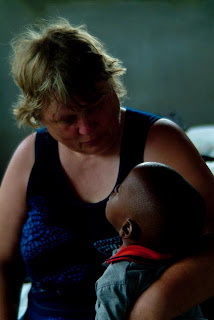 There was a news article published today - less about me than about my mother's work in Haiti, but they used my images, mentioned me and included another image of me as well. I'm not sure what they did to it, but I'm hoping it had to do with making it look good for newspaper print and used the same image for the web version... Hoping.

They also mentioned some of the work I was doing briefly and included an image of me working with people. At any rate, although I feel like the image quality is somewhat compromised, it is still good to have people taking notice of my work.

In other news, some of the job opportunities are starting to look good and make sense. I'll keep my mouth shut until things are a bit more solid, but they're looking fairly good at the moment.
Posted by Sander-Martijn at 8:51 PM No comments: We awoke to two tiny girls bringing us coconuts. The tops were chopped off by machetes so we could drink the milk. We pulled the wispy mosquito netting aside and accepted them graciously. Coconut milk is cool, almost clear and mild. The flavor is a mix of mild sweet and mild bitterness. When we had drank the coconut milk our friends chopped the coconut in half and gave us spoons to eat the meat. This to me was not as tasty as the milk, but was still an experience.

We then bathed in a natural pool at the edge of the ocean, carved out in the lava rock. Every time the waves came in the warm surf crashed over us, like a natural hot tub.
Posted by Sander-Martijn at 7:01 PM No comments: